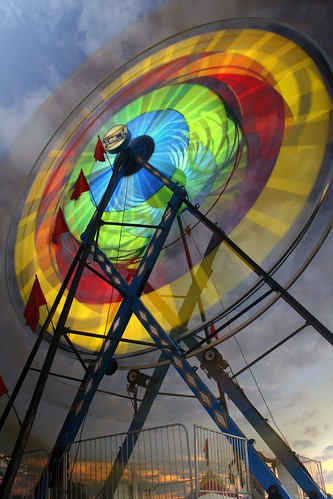 If I remember right, it was late summer of my sophomore year in high school. August was coming to a hot, dusty end in our small, semi-rural town on the California coast, and boredom had set in to the point where I was almost ready to think about going back to school (not that I would’ve admitted that to anyone).

My friend Steve had gotten his driver’s license a few months earlier, and had subsequently cashed in several years of paper route money on a car – a Datsun B210 hatchback the color of watery diner coffee with a hole in the passenger side floorboards. He was the only guy in my crew who had a car at that point, so Steve was kind of our chauffeur that summer. Or maybe we were his cargo. I remember doing a lot of what Steve wanted to do, and ponying up for gas money maybe a little too often.

Anyway, on this particular afternoon, Steve’s destination of choice was the Monterey County Fair. We had left the Datsun in a dirt lot near the livestock entrance to avoid paying for parking, and had shimmied through a cat-sized hole in the chain-link fence behind the Tilt-a-Whirl to save the entrance fee.

Which we promptly spent on two Eggrolls-On-a-Stick. With sweet’n’sour sauce. And we were sitting in the fading sun just off to the side of the Squid Stage, where the Medflys were loading in for their evening show.

The Medflys were a band of local rock’n’roll lifers, riding high at the time with a regional radio hit, “Don’t Mess With the Mayor”. Interesting title, right? The song was even stranger, a jumble of spaghetti-western guitars, semi-mexican brass, and gang vocals warning listeners not to bring ice cream cones into town. This makes a little more sense if you know that they were singing about Clint Eastwood (yes, THAT Clint Eastwood), who had just been elected mayor of nearby Carmel, California, and whose first official act had been to legalize the sale of ice cream inside the city limits. Really.

Being teenage boys, Steve and I weren’t content just to be early and score great seats for the show; since the band was loading in, there was a gate opened to the backstage area, and we double dog dared each other to sneak through and find out what was going on back there.

“Just act like you’re supposed to be there”, Steve said, “look natural”. So we squared our shoulders and strolled through the gate…where we were naturally and immediately nabbed by the Medflys tour manager. Fortunately, this was the Monterey County Fair, not the Hollywood Bowl, so he saw us more as free labor than criminal trespassers, and instead of getting tasered and hauled off to the fairgrounds holding cell, we were invited to carry some amps in exchange for…backstage passes. Yes!

Man, I’ll never forget the next couple of hours. To be backstage! Part of the show! Inside the secret world of rock’n’roll! Watching the roadies smoking cigarettes and drinking beer, setting up the amps and the drums. Standing right next to the band as they rolled out of the “green room” (actually a tiny vinyl tent behind the port-a-potties, but with its own keg), tuning their guitars and shooting the shit with each other.

And then, as the lights went down, hearing the roar of the crowd, and the blast of the guitars, and feeling it as the music surged and ebbed, and the band and the crowd connected with each other under the summer night sky, building a flow of energy that drove the crowd crazy and levitated the band off the stage.

Or so it seemed to me. I was sixteen, and had just downed enough Jolt Cola and candy apples to keep an entire high school homeroom awake for three days.

The Medflys closed with their big radio hit, which went over predictably well with the audience…but then they came back out and encored with David Bowie’s “Starman”, which even then I could instantly tell was ten times better than any song in the Medfly catalog, and my teenage mind was well and truly blown. Rock’n’roll!

So, flash forward through all the years since that night, to right now; sometimes, I feel like I’ve spent my life in music just trying to get back to that show. When I’m standing outside the back door to some club after soundcheck, beer in hand, watching the sky grow dark and hearing the audience filter in, buying drinks and laughing with their friends, maybe that’s when I get the clearest picture of why I do this. Why I’ve traveled down all these roads, and why I’ll be playing the show that night.

It’s because that connection between the band and the crowd, the Medflys and the teenage boy, between me and you, really – that’s what music is really all about. And I just want to say thanks for being part of this, and helping me bring the music to life – for the both of us.

P.S. Not too long ago, I finally got a chance to do my own version of “Starman” for a David Bowie tribute compilation (with Rick Starbuck of rex84 and 30-Watt Gods killin’ it on background vocals). This version might not be as raw as the Medflys’ live take, but I like to think you can feel the rock’n’roll vibe and a touch of the summer night in there somewhere.

This track is not currently available anywhere – I’d like to give it to you, just as a thank you for helping me make the music I love. You can check it out right here, and download it if you’d like to take it away with you – just click the blue “download” link on the player.

P.S. Do you remember the first time you were blown away by rock’n’roll? I’d love to hear about it – leave a comment!